Book of the Week for Middle Years’ Readers 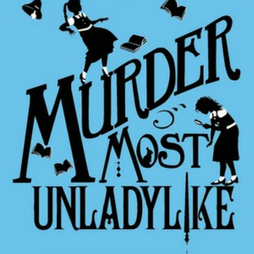 I read Murder Most Unladylike because we’ve had an increasing number of students in years 7 and 8 asking for “murder mysteries.” I have no real idea as to why these types of stories are becoming popular again, but as an avid reader of Agatha Christie in my early teens, I cannot complain! And so, it was with great pleasure that I realised there is a new range of Middle Reader-friendly murder mysteries available, one of which is the A Murder Most Unladylike Mystery series by Robin Stevens.

When Hazel Wong moves from Hong Kong to Deepdean School for Girls in England, she finds it difficult to make friends at first. After a rocky start, she soon becomes fast friends with Daisy Wells, a typical English young lady. Due to Daisy’s murder mystery obsession, the two friends start their own Detective Agency. After solving a couple of small crimes, such as lost ties or collecting gossip, Hazel eventually stumbles on their first real crime: their Science Mistress has been murdered and Hazel discovers the body.

The body goes missing shortly after Hazel discovers it and so Hazel and Daisy must race against the clock to collect clues to find out who the murderer is. They know it’s someone on staff, but who?

I did like this story, but I didn’t love it and I think it’s because I’m not it’s targeted audience. The murder mystery was well thought out though. I didn’t see the “who done it” coming and the way that certain off-hand events tied in was very clever – in this sense, it is very Agatha Christie.

Hazel and Daisy of the Detective Society are likeable enough. The mentions of Hazel’s “oriental” background and the way the girls in her form refer to her are very apt for the time the story is set in. However, at the same time, Stevens has shown sensitivity towards migrants by using Hazel’s voice as a voice of displeasure over the apparently “harmless” comments made by her peers. Daisy is initially portrayed as the perfect English rose, but her depth of character is explored further when Hazel slowly discovers that Daisy is the smartest girl in school but hides it, she loves to play rough when it comes to sport and has a fascination with murder.

The setting of an all-girls school back in the day (I don’t think the year is ever specified), and the description of the teaching staff set the scene for trouble quite nicely. The explanation of the Masters and Mistresses is slightly one dimensional; we never really get to know the staff that well, but I believe this is largely due to the fact that Hazel, the voice of the story, doesn’t know them well enough to make their personalities clearer. We see them as she sees them: untouchable and infallible.

The narrative of the story is a combination of present and past events. We see the murder unfold as the present, but Hazel adds in tidbits of information about the school and characters are reflective chapters. It’s really very clever. The other notable thing about the way in which this book is written is how Stevens has divided the story into parts. I am a huge fan of this as it gives me tangible goals for reading and I think this will only increase its popularity among Middle Readers.

Overall, I think this is a very clever murder mystery that is perfect for Middle Years readers looking for an Agatha Christie-style novel. It’s easy to read, the main characters are likeable, and the plot twists are certainly shocking.

If you enjoyed this read, look for the other books in the Murder Most Unladylike series like the titles below.

A Spoonful of Murder